A problem was observed in the process where the sieve in the 6 C.I.L tanks became clogged. The tanks have a height of 8 metres and a diameter of 4 metres. In the tanks, the mixture of water, sand, carbon, cyanide and gold, called slurry, is moved between the tanks to separate the gold, which is the final step in the gold separation process.

RESULT OF THE PROBLEM

The blockage meant the sieve had to be cleaned about twice a week, leading to interruptions in the process and unnecessary extra work. These fortnightly production stops caused loss of time and turnover. 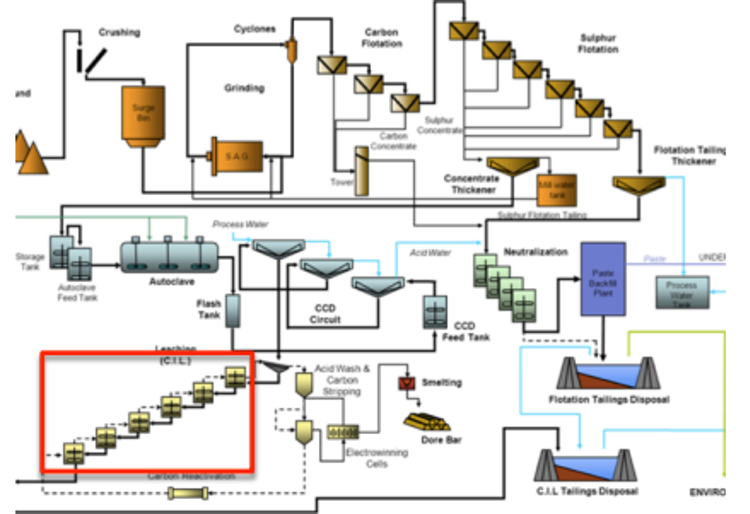 Location of the 6 C.I.L tanks

To begin with, a test was carried out with ultrasonic technology in the first tank, which experienced the most problems. The locations where the equipment was installed were verified by SONIC. Thanks to the easy installation of our devices, the customer was able to install the devices himself. The test period for the application of ultrasonic lasted two months.

An increase in work efficiency has been observed, as there is no longer a need for fortnightly production stops for cleaning. According to initial results, cleaning is now only required every 5 weeks, leading to a tenfold increase in lead time. Moreover, a time saving has been observed, as no more time is needed for cleaning the process. This was previously a time-consuming process that took many hours per week. Finally, environmental savings have also been observed, as there is a reduction in the amount of washing and use of chemicals. The application of ultrasonic technology can lead to a reduction in the consumption of chemicals of up to 60%. The process is more efficient by eliminating unnecessary interruptions for cleaning.

A case study of decreasing contamination in waterstorage tank and pipes with Alguma with ultrasonic transducers.

At Junglebao Group’s dairy plant in China, Sonic helped with descaling and protecting the heat exchanger from costly maintenance protocols.